Quote from: b0rsuk on March 15, 2017, 09:53:18 PM
And instead of making fairly involved algorithms that generate such cities, you can automatically gather colony savegames from players then run some post-processing on them.

That would be amazing, and also a real headache on Tynan's part. You would need a server and assorted architecture, backup measures for when the server is down, reliable and fast upload/download even for players with slow connections, and so on.

Then you launch Alpha 20, and full of hype you send a caravan to an abandoned town. The shape of the city is strangely reminiscent of something... You search through the ruins and find the sarcophagi of the last four inhabitants. Apparently, their names were Hitler, Did, Nothing, Wrong.

General Discussion / Re: Nevermind this playing without turrets nonsense...

March 04, 2017, 12:04:07 PM
This is where outdoors, town-like colonies with winding alleys have a great advantage. You can ambush small enemy groups in close quarters with all your might, then move and regroup before any more enemies can move into position. Animal swarms also work really well this way. Rinse and repeat until enemy retreats.
#3

Ideas / Re: Tynan, Give Disease(s) Some Love

December 26, 2016, 07:33:32 AM
Contagiousness would be a great feature to have. It would need some additional elements to not be frustrating in itself, such as surgical masks to prevent doctors from getting diseases from their patients (or the other way around), and an option for preventing visitors from entering the colony, at the cost of damaging your relationship with their faction.

And while we are talking about improving diseases, they should take longer to kill but give some lasting effects when they get lethally severe. Surviving a near-lethal episode of illness with chronic pain or reduced motor skills makes for a much better story than just dying.

The game could also use some more benign illnessses. Say, a common cold that is almost never lethal whether you treat it or not, but bed-rest makes it go away quicker.
#4

December 24, 2016, 10:40:28 PM
I feel implementing such a thing well would be so difficult it is simply not worth it. Just how would one do it tastefully enough without washing out all the emotional impact of it? Rape is considered a special kind of evil by many, worse than even murder, and Rimworld isn't really able to convey that much emotional depth, the player's perspective is simply too distant. There's also mechanical problems with this: how do you properly show the psychological damage of rape without implementing some special system for it? How do you allow people's colonists to be the good guys who don't rape without adding some kind of a morals system? Those things would be acceptable for Dwarf Fortress, but one of the biggest draws of Rimworld is accessibility, and implementing two new mechanics for the sake of a single new feature is hard to justify.

If you want to handle rape as the very sensitive topic it is, your best bet is to make a game akin to This War of Mine, centered on the thing itself, or use it in a dark your-choices-matter RPG. Doing it in Rimworld may be possible, but there are so many other features to implement that would bring more benefit at a fraction of the cost.
#5

December 24, 2016, 09:38:13 PM
I feel that Rimworld is deliberately unfair in this way because it is as much a story simulator as it is a game. Great stories are rarely fair to their protagonists, and that's where the storytelling comes from - overcoming hardship and prospering in spite of it. A scar, or a shot-off finger, is a memento of this struggle, a link to tales of the past. There's a reason grizzled veterans covered in scars are so common in stories, because it tells they've been through hell and survived.

From a gameplay standpoint, I feel it's an interesting tradeoff - will you defend your property and risk the lives of your colonists, or will you play it safe and let your settlement get trashed? The fact that no matter how well you are doing, there is always a risk to combat is a good thing in my opinion, since it means there are no inconsequential fights. You have to learn to roll with the punches. Tynan has a fine line to walk between frustration and good storytelling setups, and I feel he's doing a great job; the game might not be perfect mechanically, but in terms of making stories Rimworld has no equal, except perhaps Dwarf Fortress itself.

I do agree that some things aren't that great from either the story or the gameplay perspective. "I was trying to tame a squirrel, and it bit my hand off" is a bit lame, and maddening when it happens. It also sucks that if you get a finger shot off, the only way to fix it is to cut the entire arm away and replace it with an expensive bionic. (Hey, Skywalker got a mechanical hand, why not Tails the shunned girl?). On the other hand, I feel that for Rimworld, some frustration is a necessary part of the experience, and without it the sense of the achievement and victory wouldn't be nearly the same.

But that is, of course, up to one's taste, and you would be perfectly in your right to disagree with me. I just think the current balance of necessary frustration vs fun is the right way to go, since it allows both sides oéf this argument to mod the game more to their tastes, if necessary.
#6

General Discussion / Re: Tynan, will cricises affect the worldmap?

November 09, 2016, 08:36:10 AM
Maybe not for Alpha 16, but it would be great as an improvement added in later. It would be quite a nice addition to the world map mechanics, having temporary obstacles that you have to avoid, or if really pressed, can pass through at the cost of harming your caravan.
#7

General Discussion / Re: A16 Hype

Think about all the stuff Rimworld players do now. Brainwashing to get new colonists? Check. Cannibalism when things start going bad? Of course. Turning people into hats to just to make profit? That too. But so far, it was all done for survival, to ensure the colony will live on. But now that we'll have the ability to expand, and exterminate... People won't stop until the world is ruled by their iron fist. Three people, coming from the sky, destined to forge a grand empire or die trying...

I think Rimworld might have potential to surpass Dwarf Fortress itself in epic stories come next update.
#8

July 19, 2016, 08:55:52 AM
It's not really a plot hole if you think about it. They can't just stuff you into the cargohold, you need space-rated cryptopods not to die of old age before getting halfway to the nearest civilised planet, if radiation doesn't kill you first. Those cryptopods have to be integrated into the ship's systems, and trader ships are unlikely to have any spare capacity. The only exception to this are pirate ships, and they will gladly welcome you aboard - as long as you don't mind becoming a slave.
#9

April 19, 2016, 09:20:52 AM
If you put turrets far enough from each other, you'll only lose one component per turret destroyed, the other two drop (damaged, but you can "repair" them by putting them into a stack of undamaged ones).

But yes, don't craft components, it's not worth it at all. Put your time into making silver instead and buying the components off every trader your get, you'll get far better value that way.
#10

General Discussion / Re: Best use of devilstrand?

April 19, 2016, 09:05:14 AM
Devilstrand is great if you want to bother with armour. High quality armour protects so well it gets degraded to being nigh-useless after stopping only a couple of shots. Realistic, but your colonists might suddenly find themselves unprotected in the middle of a firefight.

Also, be <i>very</i> careful about grenades and inferno cannons if your pawns any have valuable armour and weapons, explosions can damage any equipment your pawns hold, including weapons.
#11

General Discussion / Re: How to use turrets

Quote from: Rahjital on April 18, 2016, 04:06:51 AM
Charge blasters and miniguns are bugged and hit everything except the thing they are aiming at. A single turret can often take on multiple centipedes before it's destroyed. Now if the mechs had inferno cannons, your turret would have been gone pretty quickly.

not bugged, just have a forced miss radius, if you cluster they can wreck you.

No, they are bugged. Look at what happens when you shoot a minigun into the middle of a 7x7 grid of animal boxes: 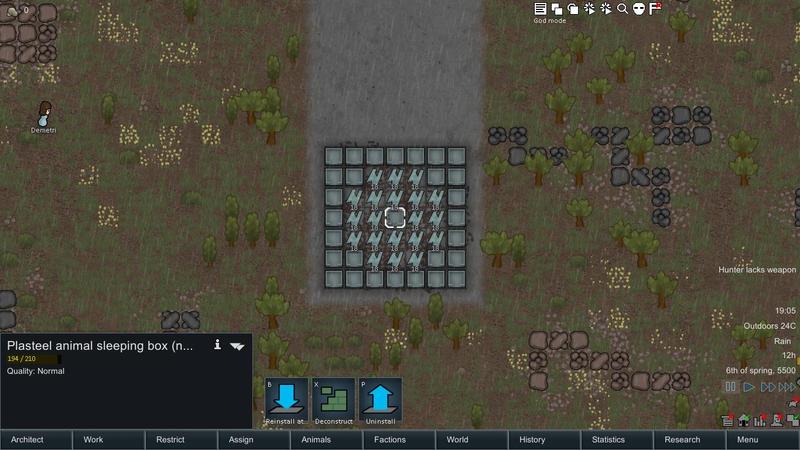 See how all the boxes are destroyed but the one in the middle is barely even damaged? That's the box my colonist was aiming for. Forced miss radius makes the weapons almost always miss the spot they are actually aiming at, which is why turrets are practically invincible to miniguns and charge blasters. The reason minigun is still effective against pawns is because you can still get hit by bullets that miss if you stand in the way.

(By the way, the LMG doesn't have forced miss radius, and can be frighteningly accurate when legendary).
#12

General Discussion / Re: How to use turrets

April 18, 2016, 04:06:51 AM
Charge blasters and miniguns are bugged and hit everything except the thing they are aiming at. A single turret can often take on multiple centipedes before it's destroyed. Now if the mechs had inferno cannons, your turret would have been gone pretty quickly.
#13

General Discussion / Re: As a long time player (Alpha 3 or so), I'm frustrated with gold, components.

April 17, 2016, 07:11:32 AM
Tynan isn't the kind of dev to add things because it's "realistic". Like Boston said, it's a mix of realistic and unrealistic, because that's simply not a big consideration in the design process. Components are designed to be a strategic resource that has to be managed carefully, and breakdowns are a constant drain to this strategic resource to keep it relevant even if you manage to keep raiders from ruining half your base. It's fun when it works, and frustrating when it doesn't, but it's just the first iteration and the issues can be corrected.
#15

Sorry, calling BS. Maybe in earlier alphas, but in A13, the debuff for selling prisoners and butchering humans stacks, and lasts for most of the season. Heavens forbid you get hit with a psychic drone during any of this. Your colony is gone.

Beer can prevent pretty much any break if you manage your colonists' drinking yourself. I had my best surgeon lose her bonded cat, husband, father and best friend in the span of a single week, but I managed to keep her sane by making her constantly tipsy. Combine that with a bonus for impressive rooms and you can power through pretty much anything, just make sure your colonists don't get drunk, hangover is a pretty severe penalty.
Pages1 2 3 ... 32