January 09, 2020, 07:54:05 AM
is it possible too have maintenance decay be decreased when on a mechanoid platform, or possibly halted altogether when you get the rogue AI thingy too support your mechanoid platforms, aslong as the mechs are on the mechanoid platform? i like the idea of it but not even having some late game research too halt the consumption of this non renewable resource which is constantly being consumed by my mechs even when they sit around and do nothing, is a bit... offputting too me, is all.
#2

October 13, 2019, 01:07:42 AM
apparent, this mod does a lot of vanilla overwrites which is apparently bad modding practice in 1.0 since it ends up caausing incompatabilities.

i was told too deliver this message from someone more knowledgeable on the rimworld discord server, that has the info: https://gist.github.com/321nick/248bfe93c15b9f53bcc865607e2aa72d

October 22, 2018, 10:55:39 PM
have you thought of adding a thing where devil sheep can sometimes cause a minor mental break in nearby colonists? seems like it would with the description it has about it being a bad omen, and not to listen to its whispers

also, did the bug with the ferralisk clutch mother eating its own eggs get fixed?
#5

September 30, 2018, 08:34:32 PM
will mods that rely on the plant work speed stat, just use the plant sowing speed stat instead, and have (hopefully) minimal compatability issues? same with mining speed?

day 1
the thrumbo pels got in the pharmacy ended up breaking through a wall and wandering away.....after taking a hit of luciferium, from somewhere. now, out in the nearby tundra, theres gonna be a wild, very angry thrumbo suffering from luciferium withdrawal killing everything insight..... yikes. 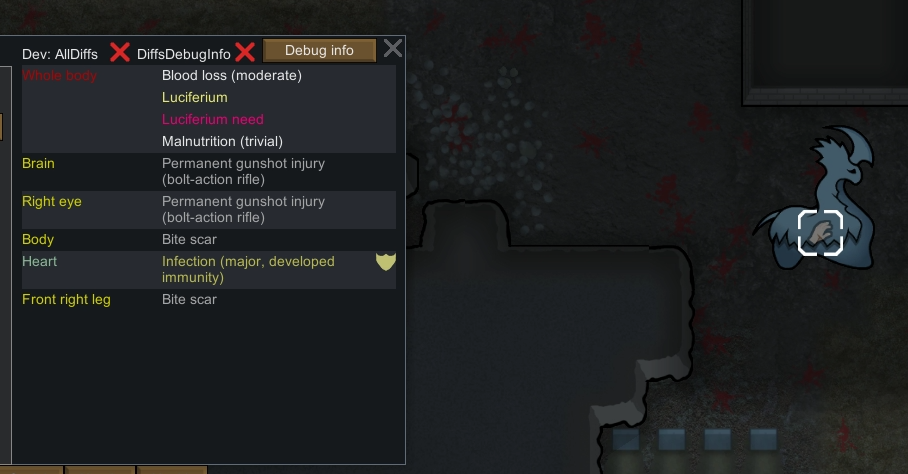 day 5
not much happened since day 1 to day 5. day 5, while ryo was out taming animals, a wild antelope or something went MAD and tried to hunt him down! luckily, with support from other colonists, we managed to take down the beast without a scratch. 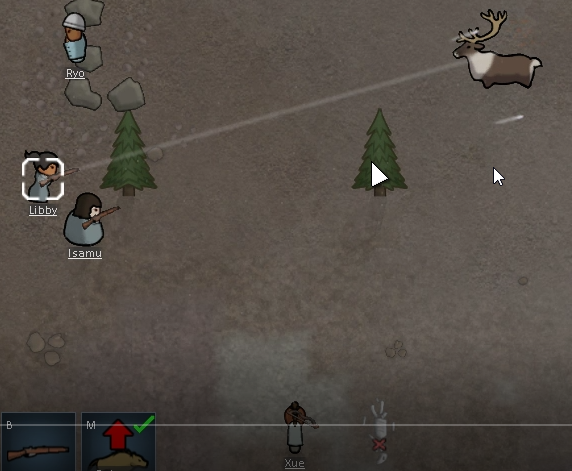 i arranged for only the FINEST plasteel double bed made for them, along with plasteel plant pots for their room. and i built a sculpturing bench and arranged for a grand marble statue to be made to decorate their room. might be a bit tight tho.

not much happening, trader "gray elephant import company" came by. we sold them all our luciferium- we dont need the devils drug in OUR clean colony D:<. in exchange, we got a lot of silver and some chemfuel, incase we need transport pods in the future.

isamu got the plague but recovers with the help of glitterworld medicine.

day 11-12
we got news of a INCAPACITATED REFUGEE stranded and doomed to DIE out in the cold tundra. being good samaritans, we went to go help em. when asked how exactly they got incapated, they told a tale about a luciferium-addicted thrumbo attacking him from outa no-where. wonder how that happened......
being good samaritans, a party of 3 colonists along with some food and medicine was organized to charge out and help the wounded refugee. 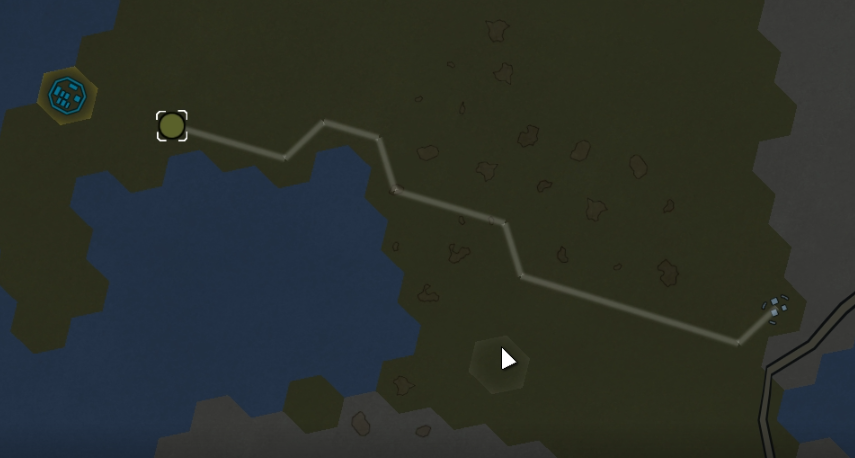 day 14
we arrive at the refugee. out of food, we decided to make a quick shelter with some locally harvested wood, too help the poor refugee get back in shape. 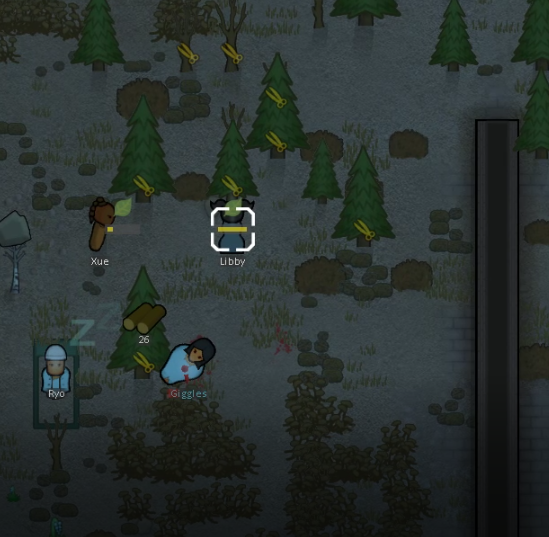 however, it was decided due too the detiorating conditions of both the colonists stomachs and minds, that wed instead make way back to home base. unfortunately ,things are extremely bleak, with no food, and having to haul this dead weight of a refugee. 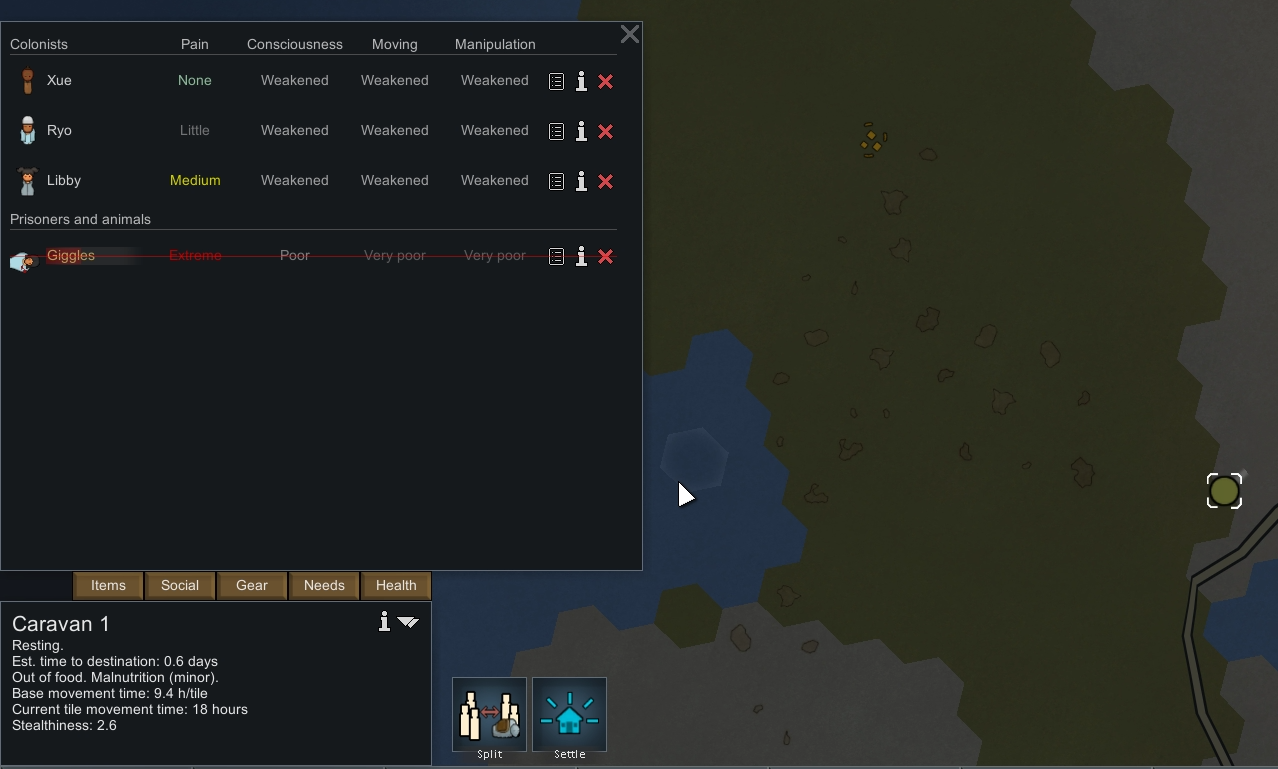 however, that is about the end of my turn, at december 1st. will the colonists make it back alive? will they all perish except for lone isamu, back at home? no one knows.

Outdated / Re: [A17] Toolmetrics: Work Tools for Pawns

October 01, 2017, 02:57:41 AM
if you could have, with the list of tools on the main page, a description of what stat each tool buffs, that would be great. i wanna know if theres anything that increases crafting speed, or similar.
#9

July 13, 2017, 11:30:17 AM
ok, its my turn i guess. i'm a bit late but ill get it done
day 1: not much happened. ash was feeling stressed- shes a nudist but she was wearing a parka- FROM A DEAD MAN! we cant have such barbarism in this colony- wearing clothes of the dead. i told her to take off all the clothes, now shes very happy and not risking a mental break. also , i saw we had a farming area planting POPLAR trees- the worst ever! those things take several decades to grow. i instead commanded the farming zone to be planting fast growing cecropias 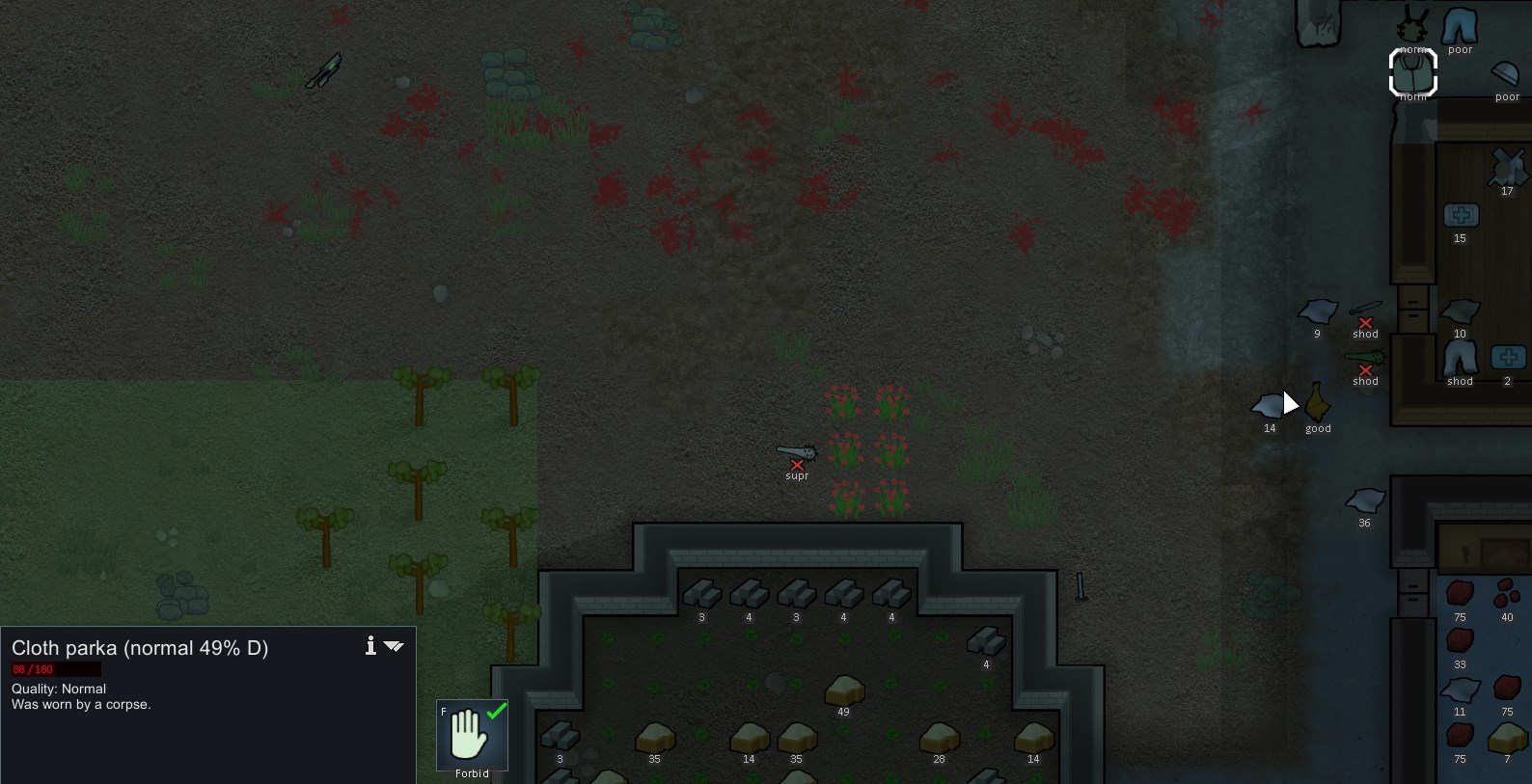 also, cecropias may be a bad idea: 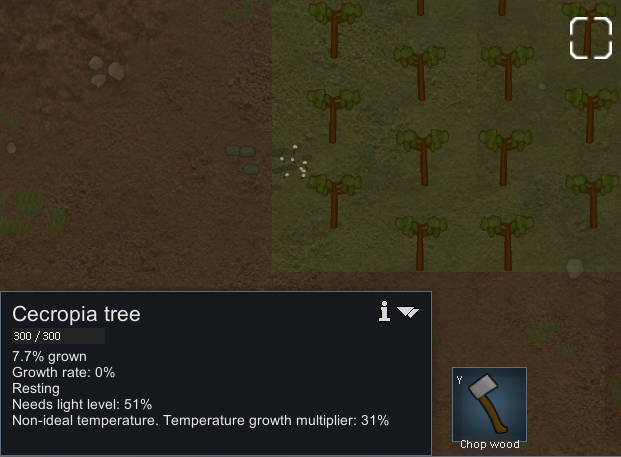 looks like they aint suited too this biome :/
day 3: i ordered ash to go check out some strange structues. apparently ash felt a sense of forboding and danger around some structures, altho we did find a wild healroot we picked up.

also, while ash was going by one of the structues, see found THE DESSICATED ROTTING CORPSE OF SOME STRANGER! she took the pair of synthread pants by the corpse, and i ordered a sarcophagus built  for this rotting corpse, but when i checked back on the corpse, it was gone! 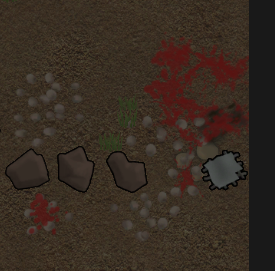 mysterious, and strange; where did it go?

day 4:
also not much happaned- we seem to have a stockpile area set up tho: 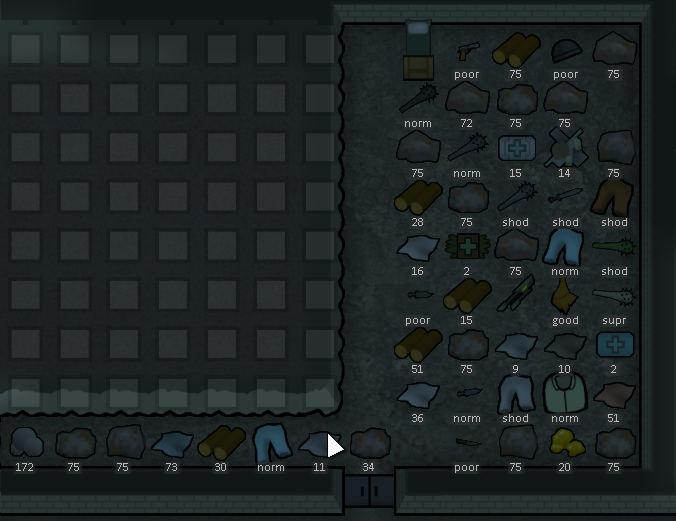 however, despite the fearsome 5 combatants, it was EZ PZ to deal with. i used a pyschic shock lance on one of them, then when they made there attack, 2 died and the other 2 fleed- cobra got slaughtered by tadashis mighty charge rifle, and a improvised turret (which i recenly built,- just in time!) mustve killed one of them i think. tadashi even killed one of the fleers!

also, a refugee named tapia or something came to us! we accapted him, hes a damn good shot 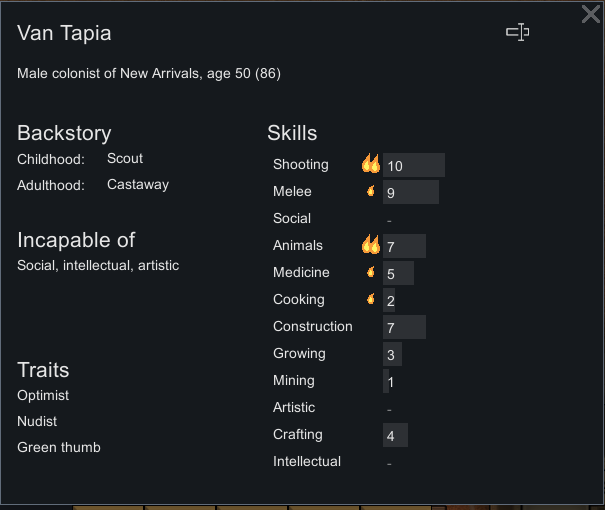 gun wielding brigands- more advanced than the previous assailants- have come to pillage our establishment. or prospering , growing colony is in risk of being trampled under the boot of furious , mindless marauders.

well, after that assault, we managed.....ok? i think? we fended them off but one of us got incapacitated 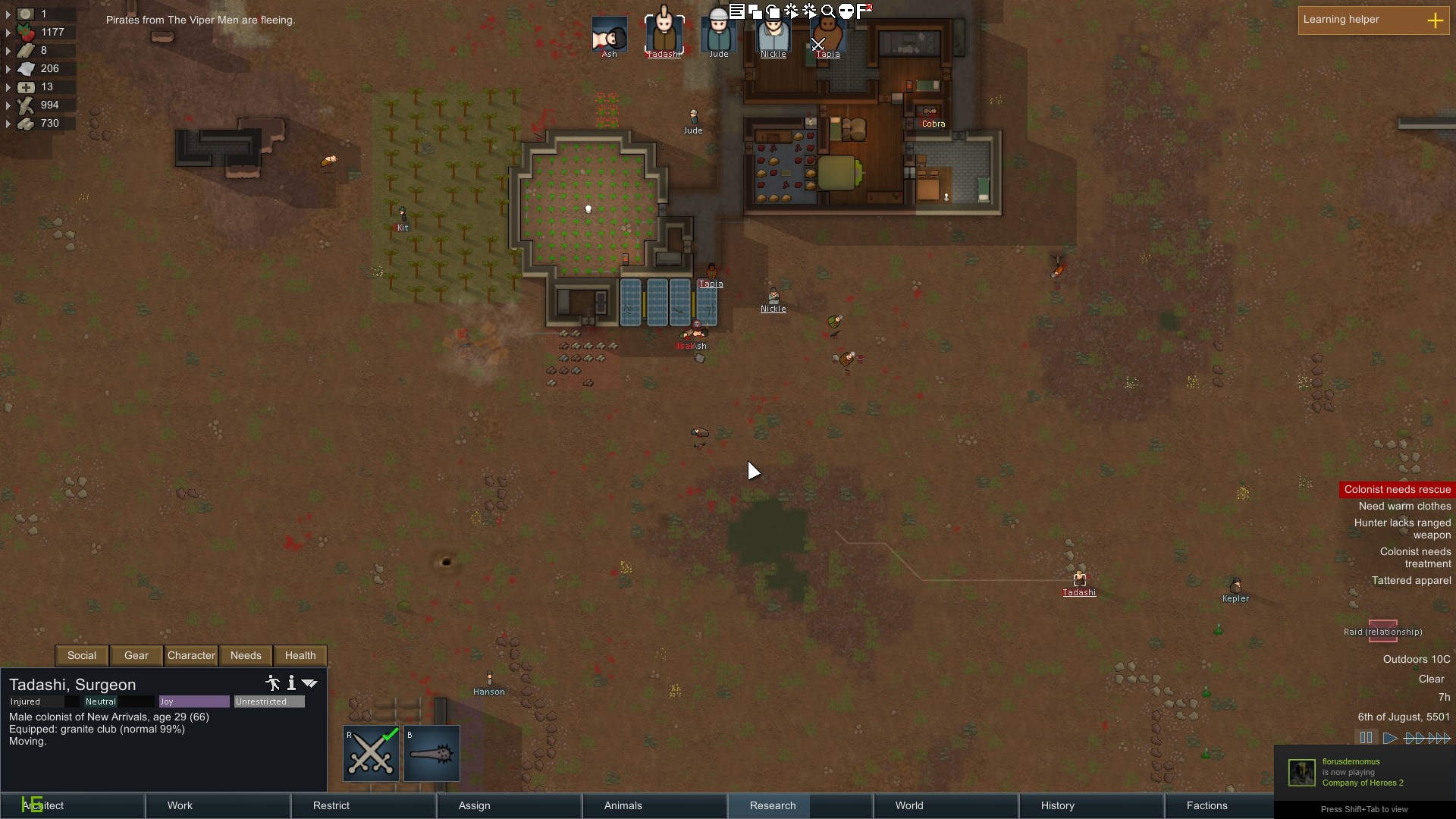 we got some prisoners tho- 1 from the tribal raid and 1 from the refugee raid. also, i think accepting tapia was the best idea yet- this colony is certainly on the path to prosperity! 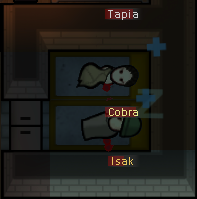 not much happaned after the raid- we got a cargo drop with dromedary leather, which is a GODSEND, and i put up some turrets, another battery, executed cobra for causing a ruckus ,

day 9: NICKLE was ATTACKED by a DREADEDTIMBER WOLF!
but we survived, tadashi shot the timberwolfs heart with his charge rifle while jude (i think) smash at it with a club.

oh my god
i think i just found out where that corpse went, the one i found dessicated and rotting by synthread pants... 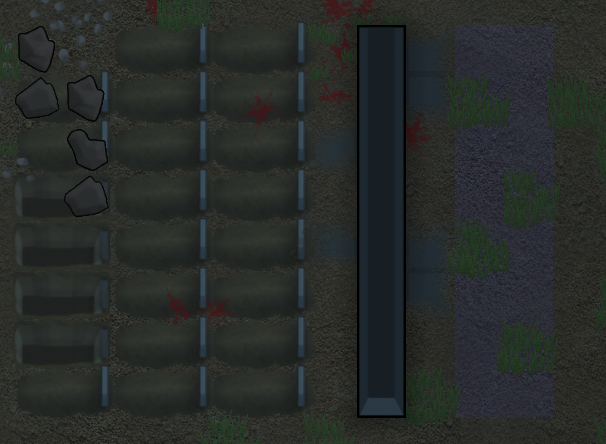 a TERRIFIYING mass-grave if i must see one. just look at all the poor, innocent people! maybe i should build a tomb in some nearby rock formation- give these poor souls a proper resting place.... nah, too resource and time intensive . 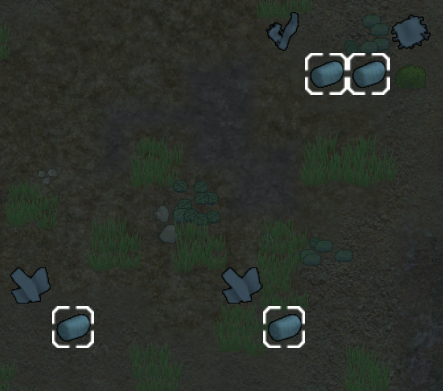 day 11: a trader came! we giving them all of our luciferium (got it from the refugee raid) and some old clothes and all of our silver for all of their chemfuel! 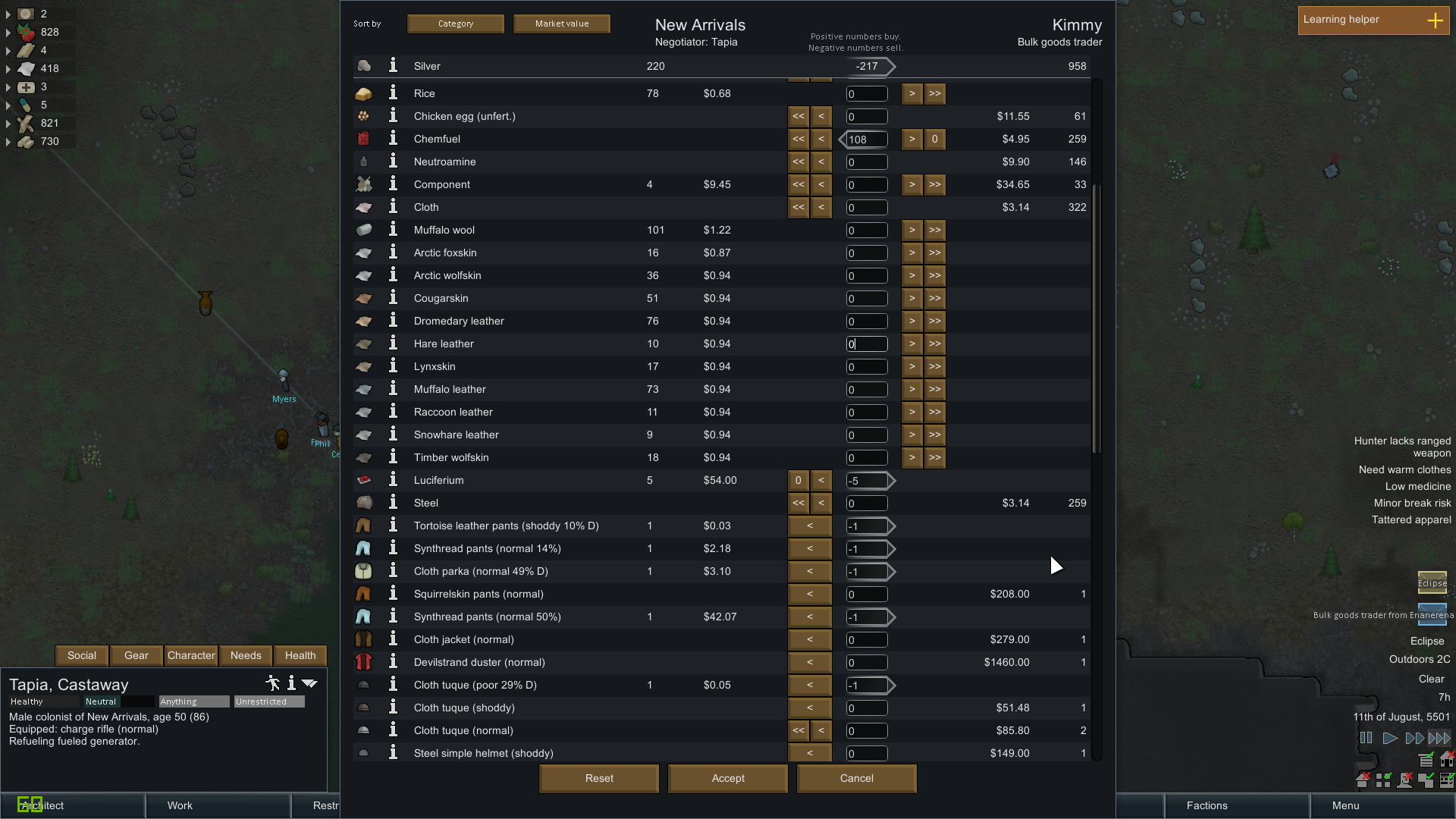 we gonna need it if we want to get drop pods for long range travel. i wnat long range travel because it will help us relocate this colony- a very long term goal, i wont do it during this turn but when its my turn again, we gonna be moving to the mountainous coast! 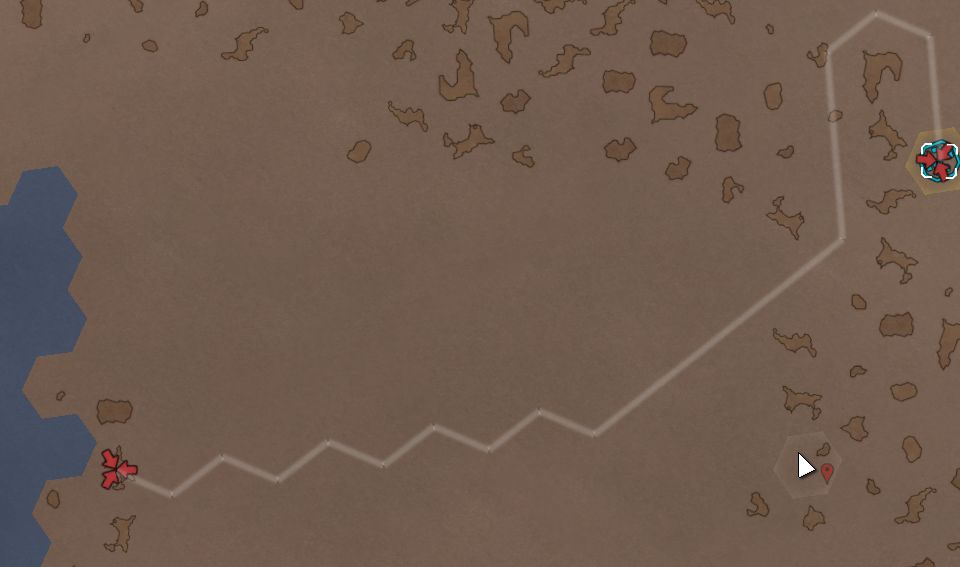 tadashi tried yet again to recruit isak, but failed 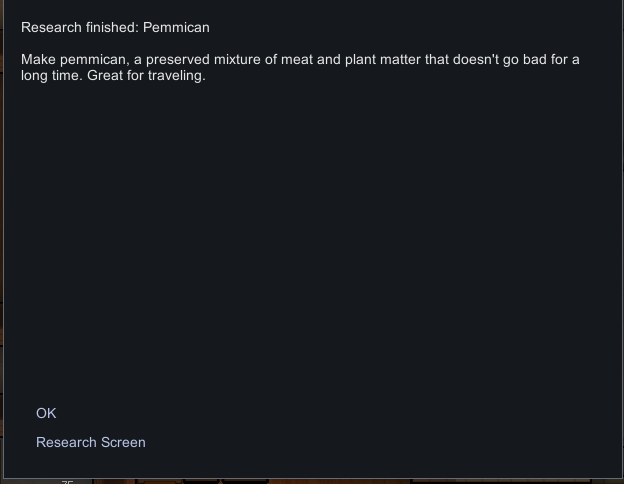 now we will re search drop pods

i built some tiny rooms for the colon ists! 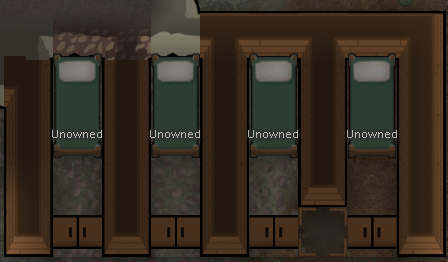 i notice a lot of our colon ists seem to be idling, so i decide to blueprint many simple research benches to be built. if ur arent doing anything, you might as well contribute to getting stuff researched. like transport pods!

day 15: the laboratory walls are done, now just need to finish the interior research benches. also, its the end of my turn! i think i have achieved great things during my turn- the person after me will have no trouble surviving and thriving.

July 06, 2017, 06:53:07 AM
i think theres a bug- i have multiple boomalopes at 100% chemical fullnes but none are harvesting, and i cantr seem to prioritize it either- i try righ click but nothing working. they have handling enabled but i still cant prioritize. 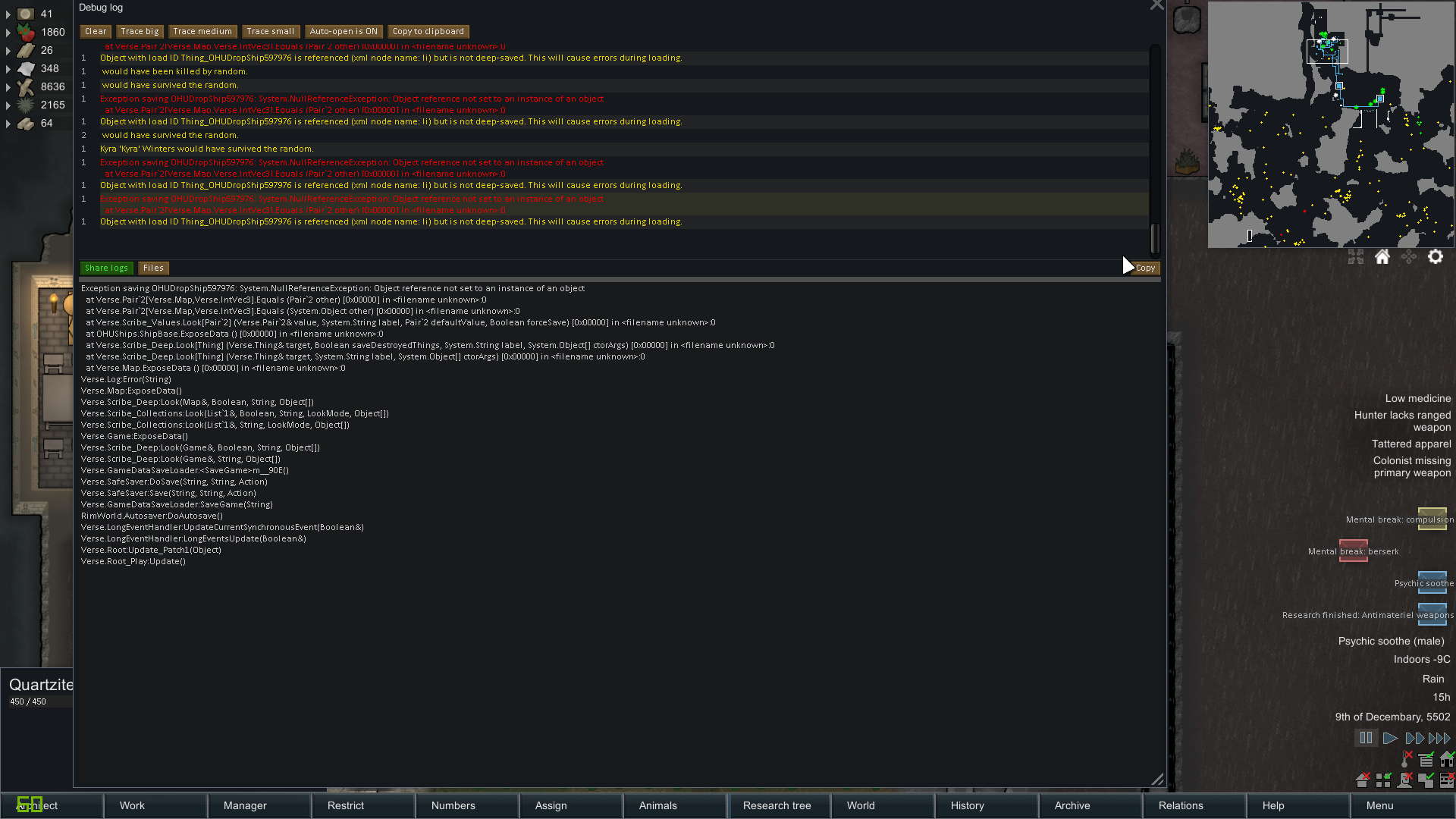 i have a dropship sitting around, built, with like, 7 chemfuel in the fuel tank, but thats about it. tis completely empty. any help?

also, can we have the ability to choose where a ship touches down in a map zone?
#13

Quote from: 123nick on July 03, 2017, 06:02:33 PM
hey, you ever play Cataclysm dark days ahead? some of the stuff in the description seems sorta similar too what you would see in CDDA, but it could just be a coincidence

Read the first uncolored line of the op, lol

cant believe i missed that

General Discussion / Re: Rimword Round Robin is now modded and A17

the turn started off alright-
i tried to bring in the wounded  raider to heal her, and ampute the major infection but the 2 tribals we had could NOT do medical aid!

i also noticed the COMPLETE LACK of STEEL, which i ammended by commanding a vein of steel to be dug out.

however, living living for so long next too this ruin of which contained unkown wonders, cubith could not hold out against his curiosity. for a month or two, he worked and lived next too these strang ruins embedded in the mountain. occasionally he would hear metal noises... what mysterious wonders could be located within?

eventually, cubith could not hold out against his curiosty for any longer- he popped it open, taking away brick by brick. after peering within the deep dark ruin, he heard a mechanoid screech! and 2 lumbering centipedes and 3 terrifiying scythers came charging out.

we fought VALIANTLY: cubith kept throwing grenades against the scythers and centipedes, lobbing the bombs again and again, an unceasing hailstorm of death, but we had only two tribals, they had 5 teriffiying mechanoid beasts. we lost. both cubith and raptor was utterly slaughtered. we did manage  to take out some of them, mostly due to cubiths grenade chucking might, raptor with his LMG was pretty ineffective.
overall, the turn took about 2-3 ingame days i think?

also, in the description of the video there is timestamps leading too the few interesting bits.
#15